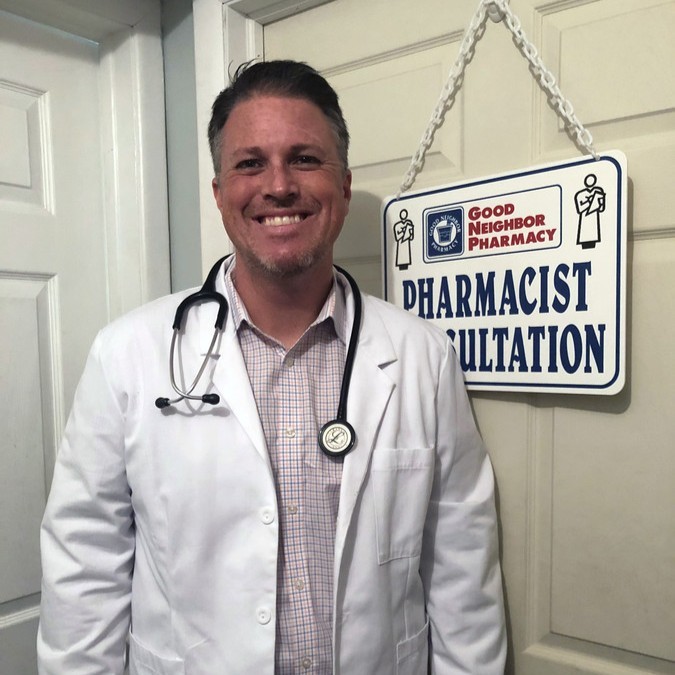 Joe is a dedicated professional and a visionary, both of which have led to his success as an independent pharmacist. Independent pharmacists are not as common today as they were years ago. Today the big retail chain pharmacies dominate the marketplace offering 24 hour service, prescriptions, over the counter medications, and convenience store goods. You may ask yourself, how could Joe compete with such juggernauts, especially since he had no established patient base and only a little of his own savings to use as start-up costs? To answer that question, let me first tell you about Joe’s background.

Joe grew up most of his life in Linwood, where he resides today. He graduated from Mainland Regional High School, attended undergraduate school at Mount Saint Mary’s University, then received his Doctorate in Pharmacy at the University of Sciences in Philadelphia (USP). During his education at USP, Joe performed residencies at hospitals, retail chain pharmacies, and independent pharmacies, where he learned and developed his skill set.

After graduation from USP, Joe worked for a few years as the head pharmacist for a retail chain pharmacy in the local area. It was during this time that Joe began exploring the possibilities of branching out on his own. Gaining an understanding in how the retail chain pharmacies operate, as well as drawing on his experience working as a resident independent pharmacist, he was able to see the similarities and differences between the two types of pharmacies, and that owning and operating an independent pharmacy was the way he wanted to go. A few of the differences Joe saw that he thought would lead to a successful independent pharmacy were: that independent pharmacies can be licensed compounding pharmacies; that they are commonly used to provide prescriptions to long term care facilities; and that his pharmacy could offer more personalized service such as consultations, delivery services, and daily immunizations. It was also around this time that Joe consulted Jeff Wilson at Capaldi Reynolds and Pelosi to provide guidance regarding the formation of a business as well as projecting the profitability of the business. After consultation, including the preparation of a financial profitability forecast, Joe saw that the vision of owning his own independent pharmacy was viable. Capaldi Reynolds & Pelosi then prepared the business formation documents and assisted in obtaining financing through the Small Business Administration. Bunting Family Pharmacy was established.

Through numerous connections with local doctors, advertising, and word of mouth, Joe began to establish himself as an independent pharmacist and develop a growing patient base. Concentrating on customer service and capitalizing on the services that a retail chain pharmacy could not provide, Joe’s independent pharmacy took off. Government regulations, changes in reimbursement rates, and the onset of Covid-19 have presented numerous challenges to Joe over the past 14 years, but Joe has met them head on and continues to thrive.

Joe’s success as a pharmacist and business owner has afforded Joe the opportunity to give back to the community in which he grew up and resides today. Joe donates both his time and financial resources to charities and organizations in our community. Joe funded the improvement of Birch Grove’s men’s baseball field, sponsors baseball teams and other local sports teams in the community, and provides annual scholarships to Mainland Regional High School graduates.

Joe was an accomplished baseball player who played college baseball at both Furman University and Mount Saint Mary’s University. Baseball continues to be a passion of Joe’s, and in 2021 he established a high school/college men’s baseball league in South Jersey, the South Jersey South Shore Baseball League, Inc. With the help of Capaldi Reynolds & Pelosi, Joe obtained nonprofit status, and the baseball league has quickly become the leading summer league in New Jersey. In its first season in 2021, 3 players were able to earn 98% or greater scholarships from the exposure of the league.

Joe Bunting has accomplished so much over these past 14 years. He credits most of his success to his wife Angela, his three daughters Avery, Alexandra, and Angeline as well as his father Peter, mother Marie, and his two sisters Kelly and Marie. Who knows what the future holds for Joe, but speaking to him as both his accountant and friend, nothing brings a bigger smile to his face than being able to provide health care to the local area while establishing the league that might produce the next Mike Trout.